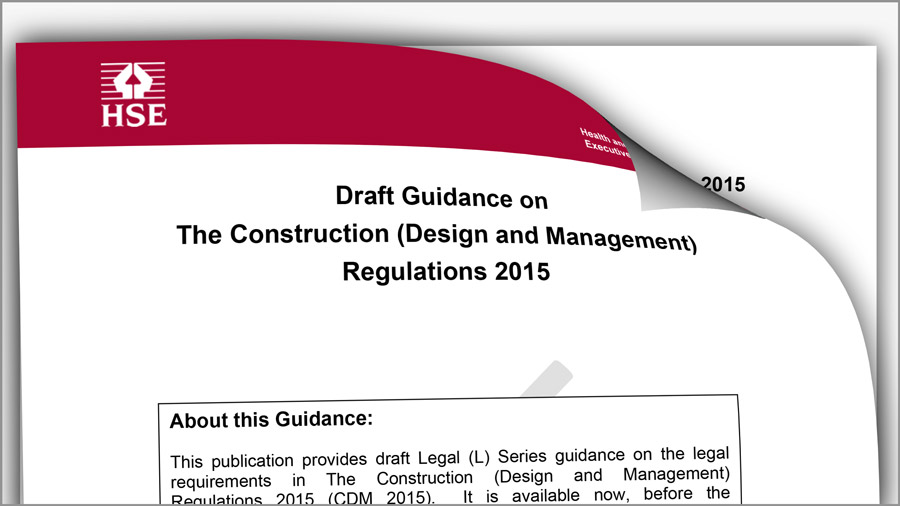 Subject to Parliamentary approval, the long-awaited and much anticipated new Construction (Design and Management) Regulations 2015 (CDM 2015) will come into force on 6 April 2015 after the Health and Safety Executive (HSE) last week published draft guidance on the legal requirements within the CDM Regulations.

The draft Legal (l) Series guidance has been made available before the Regulations come into force in April to help anyone who has duties under the Regulations to prepare in advance.

“The guidance may be subject to change while the Regulations are awaiting Parliamentary approval, but we want duty holders to have the opportunity to familiarise themselves with the main requirements before they come into force.

“In addition, we have worked with the industry to produce guidance to assist small businesses. Both sets of guidance complement each other and will help anyone affected by CDM 2015 to prepare for the changes in the law.”

How will the changes affect you?

The major changes, outlined in general by the HSE, are as follows:

Principal Designer – The replacement of CDM Coordinator (under CDM 2007) by Principal Designer, which means that the responsibility for coordination of the pre-construction phase – which is crucial to the management of any successful construction project – will rest with an existing member of the design team.

Client – The new Regulations recognise the influence and importance of the client as the head of the supply chain and as the party best placed to set standards throughout a project.

Competence – This will be split into its component parts of skills, knowledge, training and experience, and - if it relates to an organisation - organisational capability. This will provide clarity for the industry to assess and demonstrate that construction project teams have the right attributes to deliver a health and safety project.

Domestic clients – For the first time, CDM will apply to homeowners, though client duties will normally be transferred to others involved in the project, such as the contractor or principal contractor.

It is also worth noting that the HSE states that the technical standards set out in Part 4 of the New Regulations will remain essentially unchanged from CDM 2007. In addition, HSE’s targeting and enforcement policy, as a proportionate and modern regulator, also remains unchanged.

What do organisations need to do now?

For projects commencing before 6 April 2015, where the construction phase has not yet started and the client has not yet appointed a CDM Coordinator, the client must appoint a Principal Designer as soon as it is practicable.

The HSE also stated that the existing CDM 2007 webpages will be available until October 2015, while the CDM 2007 Approved Code of Practice (ACOP) L144 will continue to be available on the HSE website.

Publications which still refer to CDM 2007 will be revised as part of the HSE’s on-going cycle of guidance reviews that ensures guidance is kept up to date.

Changes to competency requirements are interesting. Guidance documents state that reliance should not be placed on an industry certification card or similar being presented. Guidance states that the following could also be used to demonstrate competency:

In this regard, I think International Workplace’s “Core Competency Assessments” will be of great use to people wishing to prove competency based on experience and existing skill, without the need to formally qualify workers at great expense as a form of workplace assessment.

It will be interesting to see if, and how, the CSCS and other industry certification schemes adapt to this concept.

Currently, a large proportion of the major construction companies and projects require a worker to have an appropriate “industry card” to gain access to their sites. The response from the major construction companies in how they modify their competency requirements for big projects will probably lead the way in regards to removing reliance on competency cards and allowing for skills and experience, and so I really hope to see a positive response from them in this regard.

A change in widely accepted competency proof throughout the industry could potentially open up the construction market for smaller companies or individuals who have great skills and experience, but have previously been unable to afford the formal qualifications required to gain an industry card, and therefore access to larger projects.

Regulation 15 defines a contractor as:

On this basis, I would interpret this as meaning that there is nearly always going to be “more than one contractor” on a project. The CITB Principal Contractor Guidance clearly states that a contractor, who engages another contractor to provide scaffolding to their project, is a principal contractor. So more often than not, the controlling contractor will in fact be the principal contractor.

On occasion, yes, there may be companies that have employees or workers who can perform all the functions required on a project, but as soon as a single element of the work is carried out or controlled by any other person, it becomes a “more than one contractor” project. This is going to require all persons involved in projects to clearly state whether they will be using any subcontractors to fulfil their contracts.

Personally, I like this change. Too often I have seen projects been carried out by “one contractor” who actually engages various subcontractors to carry out different elements of the work and actually considers the site the responsibility of the subcontractor on site at the time, glossing over and sometimes ignoring their overall responsibilities as the project manager and controller. This will be especially important in the domestic sector.

Contractors in charge of the works will now be required to actively manage, monitor and coordinate their projects (even when a particular phase of works at site is solely down to another subcontractor they or someone else have engaged) and not be able to get away with assuming a subcontractor will suitably manage the site for them during.

Commenting on the news that domestic projects are included in the new CDM Regulations, Jay said:

I think it is great that domestic projects are included in the new CDM Regulations. Not only does this bring us in line with required European legislation that the 2007 Regulations failed to comply with, but the domestic arena is the one in which we more typically see less planning and more risk taking.

Whilst the requirements for health and safety essentially remain the same, the CDM requirement for domestic clients will hopefully lead to such projects being more carefully scrutinised prior to deployment (if only because people don’t want to fall foul of new legislation) which may ultimately lead to improved planning and coordination on domestic projects, which can only lead to safer sites and projects.

Get up to speed now

From producing this blog and speaking to a number of people in the industry it is evident that training around the new Regulations is going to be essential for organisations and individuals with duties under these laws.

International Workplace’s next one-day workshop focusing on CDM takes place on Wednesday 25 February. Unsurprisingly places are selling fast, so to secure your attendance, call our training team on +44 (0) 871 777 8881 or book your place online.