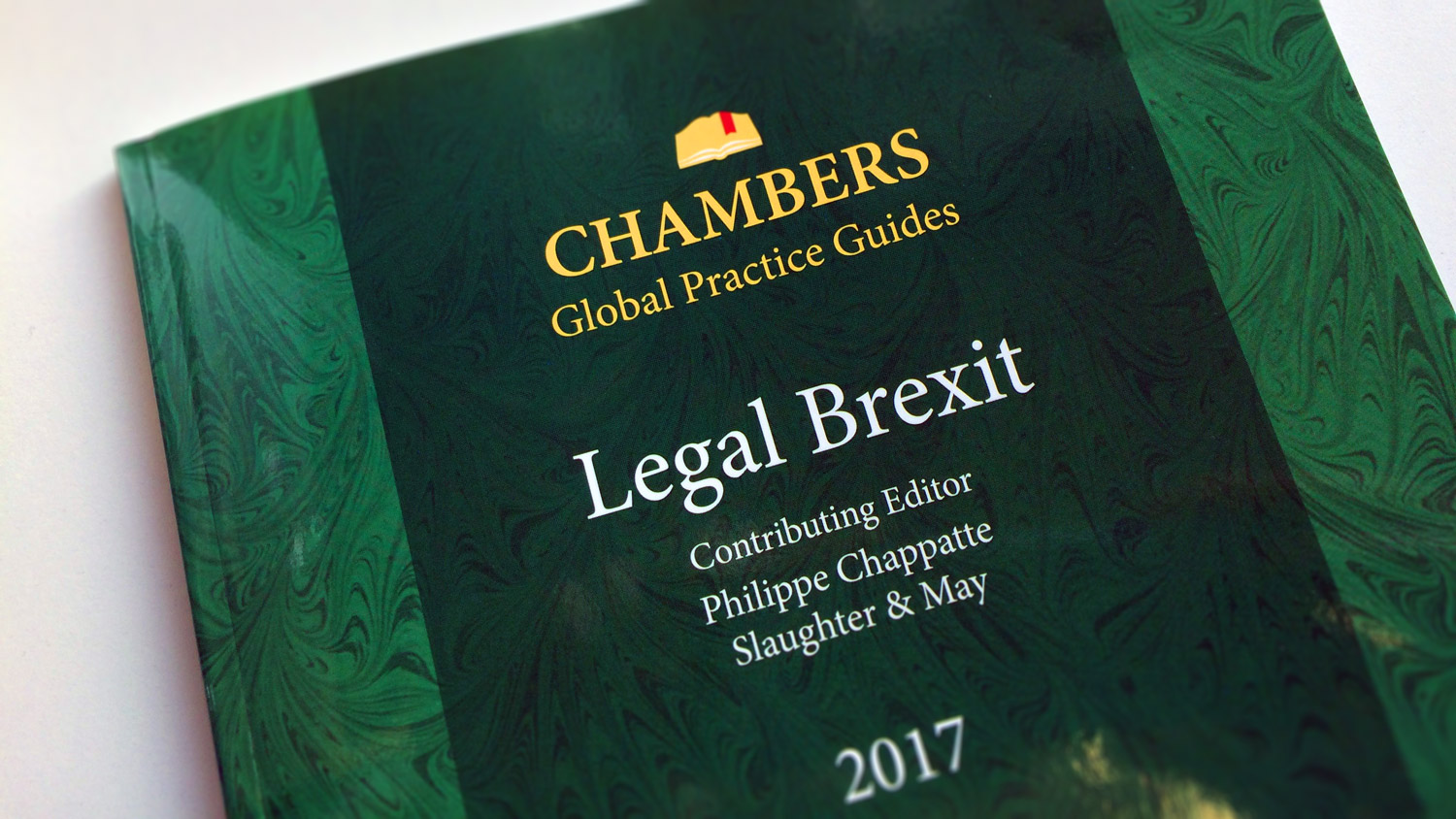 During the UK’s 43 years as a Member State of the European Union, its legal framework has been heavily influenced by the application of EU-derived legislation across a wide range of practice areas and industries. The UK’s decision to leave the EU is therefore likely to have far-reaching legal ramifications. Precisely how the UK’s legal framework will change to reflect the UK’s departure from the EU is, however, a matter of significant current uncertainty, as the experts at Chambers Global Practice Guides detail below.

UK legislation has, during the UK’s membership of the EU, incorporated a vast amount of EU-derived legislation, covering a wide range of practice areas and industries. Indeed, EU legislation forms a core part of the applicable legal framework in most practice areas.

Notably, in practice areas with a specific banking and financial focus, a core aspect of the current legal framework in the UK is the importance of the passporting regime, whereby UK-based firms that comply with particular EU-derived requirements are then able to access markets in other EU Member States (and vice versa).

Even for those practice areas and industries – such as family and matrimonial law, and the construction sector  – that have legal frameworks more heavily reliant on wholly domestic legislation and that therefore reflect EU law to a lesser extent, EU legislation still has a material effect on the rights and obligations of relevant parties, for example in family law, EU legislation addresses various jurisdictional issues flowing from the principle of intra-EU free movement of people, whilst the UK’s procurement regime is heavily influenced by EU legislation (and, likewise, EU legislation dictates the ability of UK companies to bid for public construction work in the EU). The exception to this general rule is the oil and gas industry, where a mixture of domestic legislation and international agreements provides the relevant legislative framework, with EU-derived law playing little part.

Transitional period – prior to UK departure from the EU

In the near term – before the UK has formally left the EU – the current legal framework will essentially remain in place. However, this interim period is likely to cause some uncertainty in the legal environment, as Government, businesses and practitioners look to adjust following the Brexit vote.

For example, a number of pieces of EU legislation are due to be transposed into UK law in the short term, such as the General Data Protection Regulation (in May 2018), an update to the Insurance Mediation Directive (by February 2018) and the Damages Directive (by December 2016). It remains to be seen whether the UK government will adopt all of these relevant pieces of pipeline EU legislation in the timetable envisaged or whether, in the light of the UK’s impending exit from the EU, it will re-consider whether and in what form to do so (for example, in respect of the General Data Protection Regulation, the UK may consider it unjustifiably onerous to enforce compliance with a regulation that may only be in place for a short period before the UK formally leaves the EU). More generally, it is possible that UK regulators will, in particular as the exit model develops and starts to crystallise, start to shift their policy approach to reflect the post-exit position more closely (whilst remaining in line with the UK’s continuing legal obligations as an EU Member State).

Further uncertainty is created by the duration of this interim period. At the time of writing, when and how the Government will trigger Article 50 in order to start the UK’s formal exit negotiations with the EU remains unclear. At this stage, we do not yet know to what extent parliament will be involved in the decision to trigger Article 50, or exactly who within the UK government and other political parties (e.g. the Opposition and representatives of devolved parliaments) will be involved in the negotiation process. Indeed, there are a number of separate – but linked – legal proceedings aimed at clarifying this issue (the claimants in each of which all essentially contend that, as a matter of UK constitutional law, Article 50 cannot be triggered by the UK without an Act of Parliament).

What is clear is that this interim period provides an opportunity for practitioners and businesses to lobby Government and other relevant stakeholders. Indeed, recent announcements from Government ministers suggest that there is a desire on the Government’s part to canvass opinion from business and other interested parties on the form of Brexit and other relevant issues – for example, the Select Committee on Energy and Climate Change has specifically requested views on the impact of Brexit on UK environmental policy. In the coming months, businesses and practitioners are therefore likely to be engaging with Government – both proactively and in response to formal consultation – to put forward their views as to the UK’s conduct during the transitional period and the most appropriate future model for the UK’s relationship with the EU.

The legal implications following the UK’s exit from the EU

At the time of writing, there remains significant uncertainty as to the precise form of the UK’s post-exit relationship with the EU. The nature of this relationship will have a fundamental impact on UK legislation across practice areas and industries.

If the UK joins the EEA, the resulting legislative changes are likely to be less significant than where other models are adopted. Indeed, under an EEA model the general rule is that the legal landscape will be largely unchanged, since the UK would, by virtue of EEA membership, continue to recognise multiple areas of EU legislation, including those relating to freedom of movement of people, capital, goods and services. This would mean that, for example, UK firms would most likely continue to benefit from 'passporting' rights in respect of Banking, Finance, Insurance and Financial Services and that, subject to any derogations specifically negotiated by the UK, EU migration policy would remain unchanged.

However, the EEA agreement does not apply to all policy areas – for example, it does not apply to agriculture, meaning that under the EEA model the UK would no longer receive funding under the Common Agricultural Policy. Moreover, whilst the EEA model preserves in large part the legal framework of essentially all practice areas, the ability of the UK to influence EU law and policy would be severely curtailed. In particular, the UK would lose any formal ability to influence the passage of law in the EU. For example, the UK would no longer have a veto right over EU regulations it has traditionally opposed, meaning that it would be forced to accept EU legislation which it previously could have vetoed or has in fact opposed.

Were the UK to choose instead to trade with the EU pursuant to a bilateral free trade agreement, the necessity for significant legal change will be magnified. For example:

More generally, leaving the EU (and not joining the EEA) would introduce significant uncertainty as to the operation of law across most practice areas. For example:

Whatever the post-exit model, it is likely that there will need to be a myriad of new legislation intended to reflect the fact that the UK will no longer be part of the EU. At a mechanical level, this would anyway require a repeal of the European Communities Act 1972 (in whole or in part) to be replaced with new statutory arrangements to deal with the fact that EU law no longer has the same operative effect in the UK. However, there is a wide range of other EU-derived legislative instruments currently in force in the UK which are afforded validity by the European Communities Act 1972, which will need to be assessed individually for repeal, amendment or retention. In practice, this means that some form of transitional arrangement is likely to be needed to allow current EU-derived laws to continue in force in the UK pending completion of that assessment.

There are no simple answers to the effect of the Brexit vote. The vote – and the UK’s eventual departure from the EU – will impact different practice areas and industries in different ways, but all practice areas and industries will feel the effect in one form or another. In particular, much will depend on the final form of the UK’s withdrawal agreement as well as its future relationship with the EU.

In the period before the UK’s formal departure from the EU, we expect there to be a period of inevitable adjustment whilst the legal system absorbs the effect of the Brexit vote and looks to reflect the new reality even whilst the UK remains a part of the EU. Businesses and their advisers are also making adjustments to reflect the Brexit vote in their commercial operations and contractual arrangements.

During this transitional period, business and practitioners will be making their opinions heard, whether in response to government consultation or proactively through public debate or other forms of media. It will therefore be important that business and practitioners start to formulate their preferred strategy for influencing negotiations, including by considering: (i) the precise outcome that is being sought by such engagement; (ii) with which governmental entities it would be most effective to engage, for example, the UK government (and, if so, which department), the UK parliament, EU institutions and/or other governmental entities; and (iii) when such engagement should take place to ensure maximum impact.

Join us on 20 October for the next in our series of one-day Facilities Management Legal Update events, taking place at our Executive Centre in London.

Our special BREXIT FM Legal Update will provide you with the very latest changes in law and regulation, standards and practice, covering a wide range of facilities management operations.